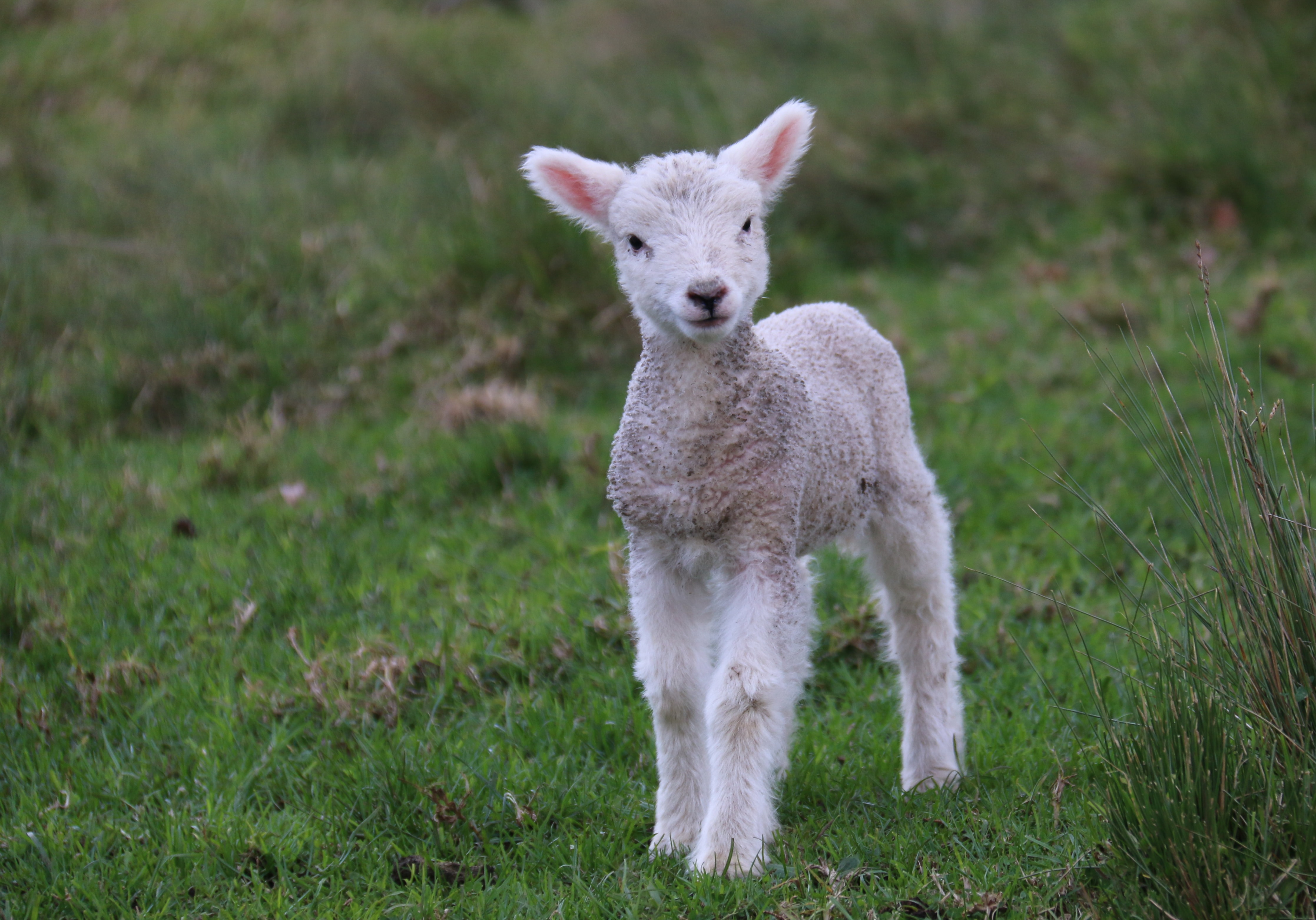 Photo by Bill Fairs on Unsplash

Welcome to the very first story for my blog!  Hooray!

I’ve chosen to tell you about Lambo… #SheepToo as it is one of my oldest and most enduring stories.

It seems to get etched into people’s minds because… well?  Let’s just jump right into it and see…

When I was a small girl of about eight years old in New Zealand, I used to spend a lot of time with my parent’s friends’ kids on their deer farm in Christchurch.

When night fell, our favourite thing was to play, ‘The Ultimate Game’.

One kid would sit with a large spotlight on the balcony that spanned the house and had the perfect view of the long driveway and series of paddocks out the front.  The rest of us would run way down the driveway to our starting point.

It was our mission to climb over or somehow get through the paddock fences and make our way through the fields full of animals to our final destination, under the house, without getting spotted by our spotter on the balcony.

This was no mean feat.  There were two long paddocks with little creeks and many skittish deer with not TOO much foliage to hide behind.  But the final paddock to make it through before the glory of victory, was Lambo’s paddock.

Lambo was this deer farm’s only sheep.  Lambo was a pet sheep.  Rob and his kids stumbled across this pitiful little lamb on the side of the road one day in the 1980s not long after the hit film Rambo came out.

He had clearly been abandoned by his mother and was going to die if they left him there.  So they christened him Lambo, took him home, and welcomed him to the family.  I can’t imagine what it was about that tiny, cute, helpless baby lamb that reminded them of Sylvester Stallone’s revenge filled, murderous madman on a rampage…  But who knows?  Maybe it was a prophecy…

Sheep are not solitary animals.  They like to flock together.  The family’s other pet was a big rottweiler dog called Max.  Sometimes Lambo would try to flock together with Max.  Sometimes Max would let him.  If he ever got into the deer paddocks he would happily flock with them too.  The kids would play in his paddock with him, and they would tear around the farm on horses and motorbikes while Lambo tried to join in.

But like all babies, Lambo didn’t stay a lamb forever. By this night when we were playing The Ultimate Game, Lambo was a full-grown sheep.

I was one of the youngest and the only girl who used to play this game.  I didn’t know I was a girl back then even if everyone else did, so I was 100% in it to win it.

We were all gathered behind the old shed at the bottom of the farm, and the spotter signalled he was about to start our ten second reprieve.  In these ten seconds we would have to scale the maybe four meter high fence, and find a hiding space where we could regroup, and plot our next move before the dreaded spotlight came into play…

Seven or eight of us kids frantically climbed the fence, jumped down the other side, and scattered in all different directions.  I heard one boy catch his shoe on the way down and expel some language one might not expect to hear from one so small… unless they grew up on a farm in New Zealand…

No time to look back.  This was every kid for themselves.

Most of the others ran off to the right or down the centre.  This day the far left was calling me and I successfully made it to shelter.

For the spotter, the time when they first turn around is the best time to ‘take out’ the most people, as that is when we runners are most vulnerable.  It is pitch black.

Is this really a good hiding space?  Am I going to make it before he turns around?  I didn’t think it was that far…

It is also the time we make the most noise. This time was no exception.

I was hunkered down behind a bush so I didn’t see the humiliating light bathe them as he shouted.  Just stay still and wait for this initial frenzy to be over Claire…  You’ve got this.

Time to get serious

I could hear some of my fellow competitors starting to make their next move across the paddock.  So could our spotter.  The light darted to the other side of the paddock. This was my chance.

My feet were air that night.  I made a good distance narrowly missing a resting deer I hadn’t anticipated.

The time you are most vulnerable is when you have to get through the four-metre-high fences.  If you were lucky you might ‘find’ a weak point and ‘help’ it into an eight-year-old sized hole, but that was somewhat ‘frowned upon’ by our parents…  Otherwise you had to pick a spot and make the climb as quickly and quietly as possible, because every good spotter knows to keep checking back here.

Another one down!  And over the other side from me!  I made my move and YES!  Fence number two successfully defeated.

And holy crap, I think I was winning!  WAY ahead of the other guys.  This could be it!  The moment I had been waiting for…

Calm down Richardson…  You’ve still got to scale one fence to Lambo’s paddock, and then the last fence before the glory of victory under the house.  It is by no means assured…

Our spotter was well focused on fence number two and surrounds now, not thinking anyone had made it further up.  This was another window I had to take before they got jumpy and started scanning again.  He thinks he’s onto someone down there…

SUCCESS!  I was in and secure!  Woohoo!  I don’t think I had ever made it this far before.  What a freakin’ hero!

But this is a dangerous spot.  It is so close to the house now.  The slightest noise can tip off the spotter.  Now was the time to be more vigilant than ever.  I had to get around Lambo’s little pond and over the other fence without making ANY noise.

Ooooh!  Another one down!  More language unbecoming of children…

The silence quickly fell upon us again, until I heard this grunting noise behind me.  What the…?

Mercifully his grunting wasn’t TOO loud.  I grabbed each hoof with each of my hands and tried with all of my strength to unlock his vice-like grip.  GODDAMNIT LAMBO!  And why wouldn’t this family have him desexed?  What was Lambo ever going to do with his libido??

The spotlight darted to my position.  Mercifully I was still concealed behind a bush.  Okay Claire, don’t flinch, don’t breathe…

The light hovered for a second, followed my attempted rapist momentarily, before coming back to the scene of the crime.

“Bloody Lambo,” I heard the spotter mutter.  If only he knew!!

The light then went back to scanning the fences further down.

The pressure is on!

DAMN that was close.  In SO many ways.  Get it together Richardson.  Who knows how long you’ve got before Lambo comes back for round two?  It’s time to win this thing!  It’s now or never!

Perfect.  Sam was spotted still back in the second paddock.

There was a little tear in the fence I thought I could manoeuvre so I could slide through next to one of the far posts.  Scaling the fence this close is almost suicide.

I worked it a little.  Keep it quiet Claire.  You can do this.

I saw the light swing violently my way and darted quickly back behind a bush.  Breath held.

The spotter was looking everywhere now.  I was not going to have the luxury of so many others distracting him anymore.

I crept back to the spot, slid through, and made the dash to victory.

The sweet taste of victory!

Expletives from the spotter, cheers from those who were already ‘out’ and waiting at the top. No one ever expected me to do it.  But glory was mine and it tasted good.

It was now time for me to take the ultimate prize.  It was my turn to be the spotter and I KNEW I would kick arse at it.

But of course, Mum and Dad decided it was time to go home before I could take up the honour.  Oh well, maybe next time…

I reflected on how Kiwis are often referred to as ‘sheep shaggers’ by outsiders, particularly Aussies, due to the country having more sheep than people.  But who are REALLY the predators here??  Maybe it is not that cut and dried…

And what became of Lambo?  He kicked around for a few more years and increasingly began living up to the behaviour of his namesake.  He started ramming into other animals and even the kids on their bikes and horses.  After one particularly bad incident with the youngest daughter, they decided that Lambo, much like his namesake, was a menace to society and had to be taken out.

Although his stealth skills were impressive for a sheep, Rambo he was not. He met his demise one sunny afternoon with a bullet to the head from the oldest son, who once so lovingly reared him.

Whatever you do, don’t go to the doctor