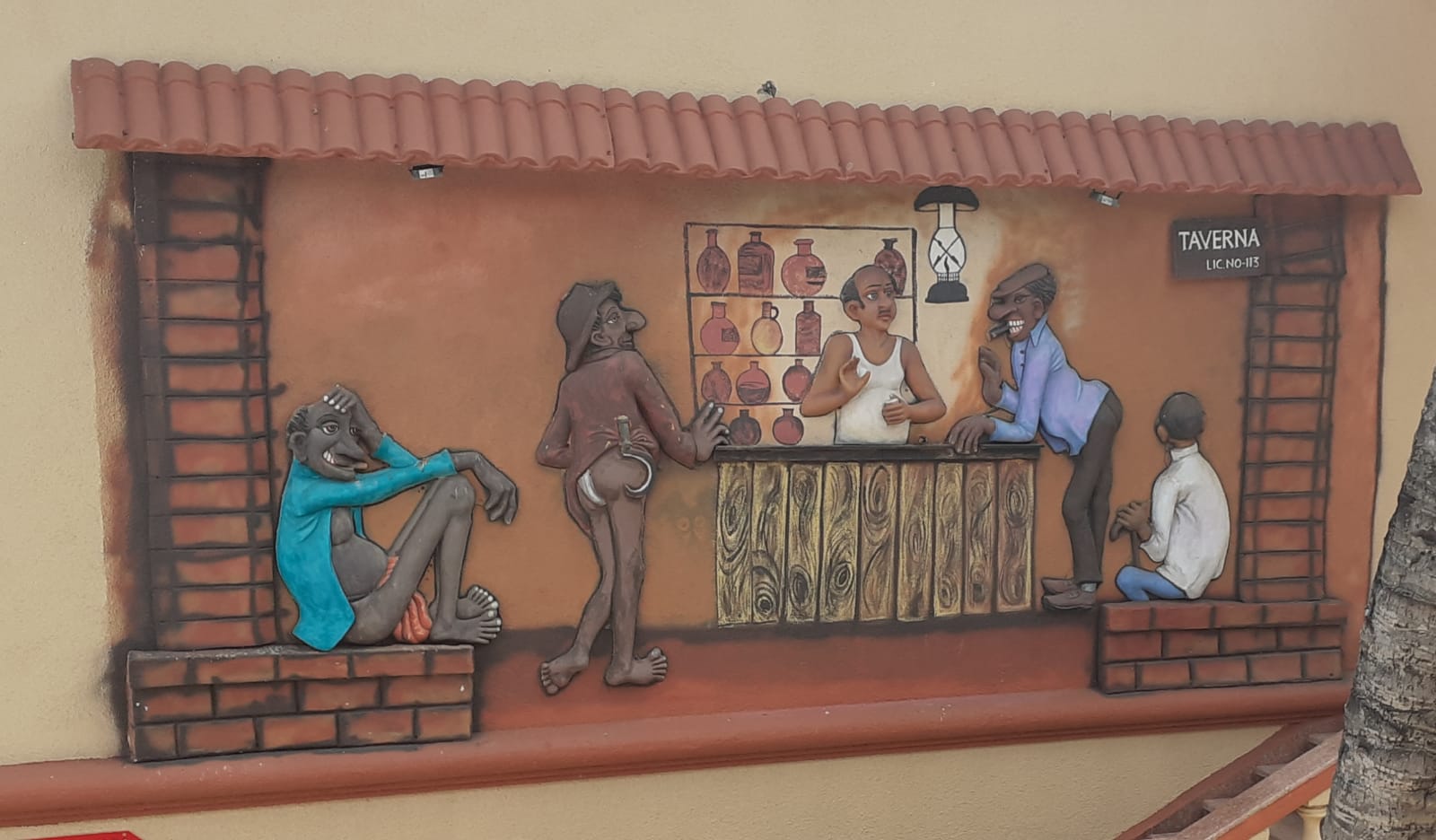 “It is very hot here Madam.  Everything is hot here: man is hot; sand is hot; everybody’s hot!”

Words of wisdom greeted some ladies entering the beach down a long, uncovered path in the beating sun, from the chubby, local shack worker with his long, receding hair pulled back, and huge cheeky grin.

I now totally get what all the fuss is about.  Goa in February (and I’m told from November until about April) is the perfect temperature in the shade.  As I write, I am sitting in a shack on Calangute beach.  It is 29 degrees, I am in the shade, and there is a lovely cool breeze blowing from the ocean.

Calangute is one of the tourist trap beaches, but as far as tourist traps go, this one is pretty awesome.  The sand is fine and mellifluously massages your feet as you walk on it.  The beach shacks are plentiful but not overcrowded.

It does seem to be a retirement village for overweight, old white people.  I’m noticing a lot of Russians and English.  They are quite at home baring themselves too.  No body image issues on this beach!

The food and booze are cheap and lovely.  If you love seafood, the Goan fish curries are Devine.  But they know their market.  There are also plenty of staples for the overweight, old white person who may not be so adventurous.

This is the reason I am here.  My friends invited me for their wedding at the W Resort in northern Goa and it was absolutely beautiful.  I will not post pictures of the couple etc… here as I respect their privacy, their wish that we relaxed and enjoyed the proceedings, and left the clicking to the many professional photographers who were around.

For those of you curious about what a wedding might look like at the W Resort, this is the link.

I had a great time, met many new lovely people from all over the world, and really enjoyed seeing my friends tie the knot.  I took a couple of sneaky pics at Fort Tiracol at the main Western wedding.

This is the view back to Karnataka.  To go to this Fort we travelled over an hour and crossed state lines into Maharashtra.

The nuptials happened just before sunset.  Although they didn’t plan it, it turned out to be quite an auspicious day with the full moon rising opposite as the sun set.  Just beautiful.

Jesus was there, but so was Hanoman!  I didn’t get a picture of the Hindu monkey God as I only saw his pic the day after.  It is unusual for such a Christian monument to also have other religion’s things built in.  BUT there are a lot of monkeys around the Fort, so perhaps they were just hedging their bets?

Of course, there was fabulous food, engaging and entertaining speeches, and good times had by all.

I spent the remainder of my days on the beach doing a little work, with the exception of one day I hired a scooter and had a little look around.

Fort Aguada and beyond!

The boat trip around Fort Aguada and beyond was approximately 45 minutes with the aim of seeing some dolphins as well as the local sights.

This is some guy who made his money from diamonds’ house.  He overlooks this house below.

They are obviously concerned about overcapitalisation on prime waterfront land…. Who has the better view??

This is Fort Aguada, an old Fort which became Goa’s first jail.

We did see dolphins! But it kind of felt weird having all of these boats chasing them down. I didn’t get the impression the pods were that impressed…

One or two fishing nets on the beach there.

My kingdom for a coconut!

I was somewhat parched after my voyage so stopped on the side of the road at a very basic stall for a coconut. They had a couple of plastic chairs and some big bits of wood as tables set up so we weary bikers could relax while we wet our whistles.

I plonked my bag on the chair beside me and drowned blissfully in all of the glorious electrolytes and potassium absorbing into my body.  Damn coconut water is awesome.  They are smaller here than their giant Balinese counterparts but they still do the job.

Next it was off to lunch.  Bizarrely most sit-down places don’t keep coconuts on their menus.  It seems to mostly be a side of the road thing at least in the places I was going.  Hence the pre-lunch detour.

Back to the coconut shack.  Argh.  Passport, new mobile phone I just bought (they all have death wishes), the maximum cash I could get which I just withdrew from the ATM, plus ALL things in the Tardis a.k.a my handbag.

I flew back.  But it was still a reasonable distance and a little traffic.  There was no way it was going to be there.  That meant the rest of my afternoon would consist of police reports and cancelling everything.  Blerg.  Hopefully they just took the money.  If they didn’t take the money I would give them some.  If it is even there.  Argh.

I got there after an eternity despite my elevated speed and went up to the counter.  The woman smiled and gave me my bag.  I opened my wallet and it was all there.  I took out INR 1,000 (about $20 Aussie) and gave it to her.  She wouldn’t have it.

I tried to leave it there but between the lovely shop keepers and their new guests it was forcibly given back to me.  Apparently I was messing with their good karma by compensating them for the good deed of not stealing all of my stuff.

I left relieved to have ALL of my stuff back and not have to spend the afternoon and likely the next few days in administrative hell trying to rectify that situation.  I returned to Fisherman’s Cove and celebrated with a seafood platter of goodness.

Chilling by the beach

As far as offices go, this one is pretty good.  Particularly as the sun goes down.  There is lots of visual interest.  This is my spot right near the shoreline in time for the sunset spectacle.

Awwww.  There are the colours starting to come out and the punters basking in it.

It is not just people drawn to the scene.  Calangute beach dogs are super cute and super friendly.  And they have their little rituals.  This dog was SO careful about digging her little cubby to snooze in.  It was quite the performance.

Oh yeah, that is the cubby in action below.  Meanwhile her mate came in, moved a little sand around for about a second, then happily plopped himself down.  I guess we all have our little peculiarities…

One thing all of the dogs agreed on was they didn’t like the police on the ATV.  On their way up and on the way back (seen here) they let them know exactly how they felt…

It is funny once the sun sinks below the horizon our cameras change back to more light.  Yes, I know the physics behind it…

And as the sun goes down further the colours deepen.  It really is a lovely place to sit and get things done while occasionally looking up to bask in the show going on all around.

If you play with fire…

One evening I sat in my favourite spot and some locals came with some not too shabby fireworks!  For me?  They shouldn’t have!

As it would turn out, they really shouldn’t have.  For whatever reason, after letting off quite a few perfect, sparkly treats, they got bored and threw a whole bunch in the fire.  Of course they flew off in different directions leaving punters such as myself jumping off our chairs and hiding behind our tables, as these fireball missiles flew towards us and exploded around us ominously.

Before going to Goa I have to say I had some preconceived, uneducated views on what it would be like.  And much like Bali, if my friends weren’t getting married there, it is unlikely I would have prioritised it as a destination.

There is SO much more to see in this beautiful region and I am well aware I barely nicked the tip of the iceberg this trip.  But that soft, sumptuous sand, the glorious Goan fish curries, and that addictive cool sea breeze…  Consider my appetite wet and I will certainly be coming back for more!

Pondering death and what it all means

The great coronavirus escape – reflecting one year on…